History is fascinating, isn't it? And, thanks to memorials that have stood the test of time, we can trace history with more ease than we would have been able to without them. That's why I love the work that I do, and also why I love to study burial, cremation and memorialization histories everywhere I go.

I recently took a girls' trip to Italy, where I was able to briefly study the history of ancient Roman burial and cremation traditions. Both practices, which are still in tact today, have an interesting history that I wanted to share with my readers.

While I was in Italy we took an afternoon trip to an ancient Roman city called Ostia Antica. Just a short train ride from Rome, Ostia Antica was once a thriving harbor city located on the Tiber River that received and stored goods that supplied ancient Rome. This city was believed to have been founded in 620 BC (how cool is that?!) by the fourth king of Rome, Ancus Marcius.

When you enter the Ostia Antica historical site you enter via a cobblestone road on what was then the outskirts of town. As I walked West on the road toward the center of the ruined city a building with sun rise mosaics caught my eye. 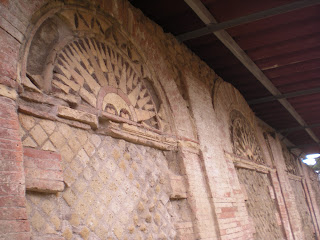 This building was particularly interesting to me because it featured mixed mediums (travertine tile and brick) and the sun designs still held some color- you can see the faint yellow and red that has been dyed into the tile. I never learned what the importance of the sun seen on this building was, one can assume that it had something to do with the pagan religions that were practiced at the time. Considering that this building was, more than likely, built in BC times, I thought the craftsmanship to be absolutely amazing. BUT...what was on the back side of this building was even MORE amazing.

As I rounded the back of this building I stumbled upon another cobble stone road with this modern day sign. 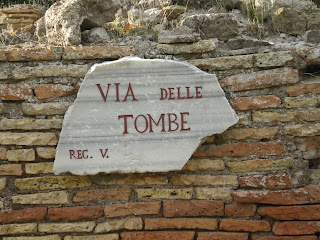 Of course you can guess what this street was- it was the road leading to the tombs! And what I saw and learned just past the little street sign was worth the price of my train ticket to get there! Can you guess what the little "cut outs" seen below are? 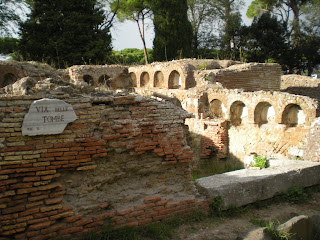 After a little research I discovered that the little rounded cut outs were actually cremation niches. This discovery told me two interesting things:

So the ancient Romans would cremate their loved ones in BC times and very early AD times and then fill cremation urns with their loved ones' ashes- just as we do today. I actually found a few ancient cremation urns in one of the Vatican Museums and have post a picture of them so you can see how stunning they truly were, especially considering the tools that would have been available during that time period. 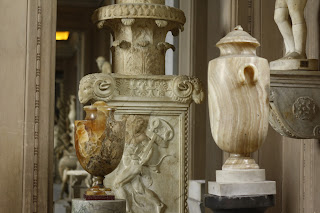 Urns like the ones you see above would have been placed in the cremation niches, which were housed in the niche walls along Via Delle Tombe. Of course the building would have hosted a roof, which is believed to have been lost due to a combination of mud, flooding and time.

Ancient Romans were very skilled at engraving and had to ability to engrave their urns, like the one below. 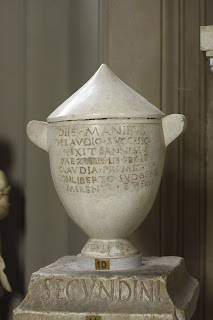 As I continued to walk about Via Delle Tombe I began to notice the number of niche walls that lined the road, supporting the theory that cremation was a very common practice in BC and early AD times.
The interesting thing to note is that cremation practices practically came to a halt with the spread of Christianity. Why? Because of the belief that those who have been buried will rise up to the East to meet the Lord on his second coming. Individuals could not rise up to meet the Lord if there was no body left, so the ancient Romans shifted from cremation to inhumation (i.e. burial).

The ancient Roman inhumation/burial practices are fascinating, as are the methods by which they chose to memorialize their loved ones. I will be posting about that soon, so stay tuned!
In the mean time, I hope you found this post to be just as interesting as I did and hope you have gained some knowledge that you may not have had.

At Emerson Monument Company we strive to be experts in all aspects of our field, including the historical aspect. If you would like to learn more about how we can help you preserve the legacy of a loved one or your family, please contact us and we will help you get started.
Posted by Alison at 9:05 AM 3 comments: