What a blessing it is to work with families and create stunning memorials that truly capture who they are and what they were "all about"!  And while it is SO difficult to truly capture a life story on one single piece of stone, the Reeves family has done a great job of honoring the husband, father and son that they love and miss.

Racing was a family affair at the Reeves' home.  It was a sport that Franklin was passionate about and his wife, Anita, was supportive of.  In fact, even the kids got involved, eventually earning them the title of "Reeves Racing pit crew"!  As I sat and listened to Anita passionately describe her husband...and the father that he was...and the abilities he had...I couldn't help but to suggest a memorial that featured the car- a piece of their lives that the family enjoyed together.

After much discussion and planning, it was decided that we would use an actual racing photo that, I believe, was taken by Franklin & Anita's daughter.  If you look closely below at the space just behind the back window, you will notice the words "Pit Crew" followed by the Reeves' family's names.

When we received the photo we immediately had it cropped and enlarged to fit a double stone.  This part was tricky because we had to ensure that the car would enlarge without losing the level of detail that we desired.  But it all worked out!  Calculations were then made to determine the exact size of the stone and the positioning of every cut to ensure the stone would be an exact fit to the image.  Once that was done, we sent a series of proofs to the family for them to review and change until they had it just the way they wanted it.

﻿At Emerson Monument Company there is nothing we love more than to help families design and create lasting tributes in honor of their loved ones.
Posted by Alison at 8:46 AM No comments:

The spotlight was on Emerson Monument Company in the September issue of the MB News! 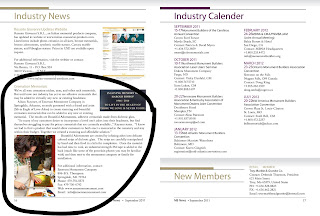 Beautiful Adornments are vibrant dichroic glass tiles that contain a small portion of a loved one's ashes. They utilize an industrial strength 3M tape to adhere them to the back of granite memorials and look absolutely amazing in the sunlight. 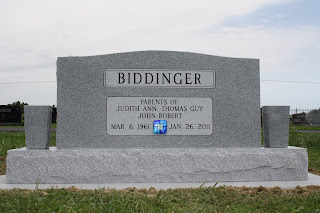 We are proud to have teamed up with Love Ashes to offer new and unique products to the customers we serve.

Posted by Alison at 6:23 AM No comments: