If there is a group of folks who deserve a memorial, it is the Veterans who have proudly (and bravely) served our country.

Memorial Day weekend of 2009, we erected a beautiful Veterans Memorial in Farmington, AR.  It was here that a small committee of folks belonging to the Farmington Veteran's Council, brought some ideas together to honor past, present and future Veterans of our United States Armed Forces.  When they came to us they had a general idea of the memorial design and looked to our expertise to help make it happen.

We recommended a Georgia Gray granite for the memorial and further recommended using laser etched black granite tiles for the Great Seal and the seal of each branch of the military.  By laser etching each seal, we were able to obtain a level of detail that is crisp and accurate.  We then inlayed the black tiles into the gray granite.

Now, I will tell you, there is a fine art to inlaying any kind of tiles into granite.  Why?  Because the inlaying needs to be precise and accurate so that there are no holes or gaps between the base stone and the inlayed stone.  Tiny holes, cracks and gaps could potentially set the base stone up for future problems and are certainly something to avoid.  Here at Emerson Monument Co, our craftsmen are second to none and did an absolutely amazing job with this memorial. 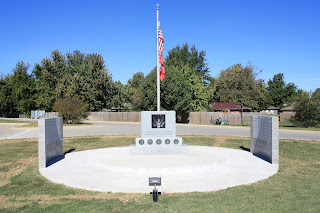 Although some of the memorial was donated by local organizations, the group also needed to do some fundraising to make this memorial possible.  They achieved the necessary funds by selling engraved bricks that were inlayed into a concrete block wall.  Engraved bricks are a lot of fun and very popular because it gives each individual his or her own little tribute within the encompassing memorial.

I truly enjoyed attending the dedication and memorial service hosted when the memorial was erected.  There was a great turn out of Veterans and their families, as well as some members of other interested organizations.  Several Veterans spoke and told heroic stories which deeply touched my life forever; yes, I am grateful to have attended.

Posted by Alison at 8:55 AM No comments:

While the weather isn't great for setting monuments, it sure is perfect for admiring them!

I never knew what a Tesla Coil was until I met Cassie.  In fact, when she mentioned she wanted one on her father's memorial, I had to look it up to see what one was; and they are actually pretty cool! 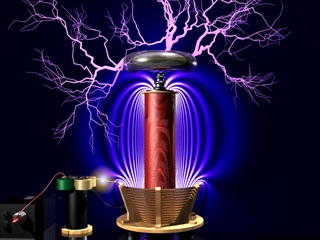 Cassie went on to tell me that her father built Tesla Coils in his free time and loved Science.  Therefore, she felt confident that incorporating one into his memorial would be very appropriate.  She went on to show me some photos of what she had in mind (see above) and, after further discussion, decided that the coil would be most recognizable if it was laser etched as opposed to sandblasted.

Because we are able to pick up so much more detail with the laser than we are with standard sand blasting.

However, as we visited with Cassie we learned that her father was terminally ill and had a short time to live.  This information was very important for us to know because it meant that we would need to sandblast her father's first name and his date of birth.

Because her father's memorial would likely be placed in the cemetery before he passed, it was important that we accommodate her need for future lettering (i.e. engraving his date of death on the stone).  You see, all final date cuts are done at the cemetery with a portable sandblaster.  There is not a portable laser capable of doing final date cuts and, thus, not a way to match the style of a laser etched birth date.

Working with both sandblasted and laser etched designs on the same memorial is really very common.  Working with two mediums adds a variety of textures to the memorial and looks really good.

Keeping that in mind, we explained why we needed to both sandblast and laser etch the stone and provided Cassie with the following proof.  The blank space below his last name is the area in which we would sandblast his name and birth date. 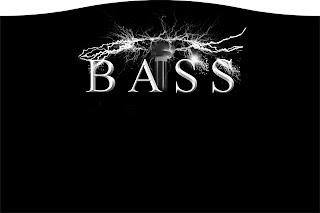 Once Cassie approved the drawing, we had the stone etched for her father. 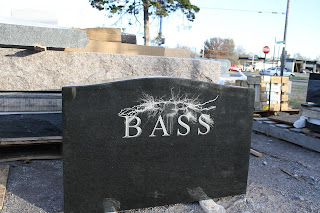 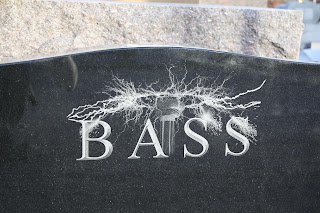 After laser etching the stone we added the sandblasted inscription.  You will notice that the family decided to arrange his birth date a little less traditionally with the month spelled out and the "rd" after the 3.  It is important to note that there is no "right or wrong" way to inscribe one's dates of life.  We have inscribed dates in several different languages, numerically and even symbolically.  ﻿ 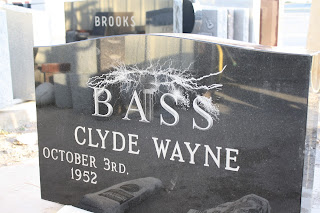 At Emerson Monument Company we take pride in our ability to create beautiful custom memorials that may be found no where else.
Posted by Alison at 12:32 PM No comments: